Jeremy was born with Down syndrome and a host of other medically, confusing diagnoses.

He is the only person our physicians know who also has (FSH) Muscular Dystrophy. He’s now 35 and doing great. 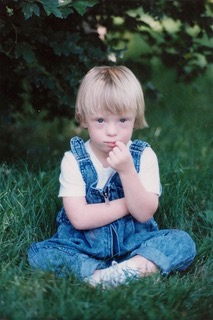 Jeremy’s journey saw him included in public schools, graduating with an Occupational Course of Study from high school, attending Beyond Academics for four years at UNC-G, and living on his own with supports in an apartment not far from his work site at a local restaurant.  He received the Disability Rights NC Champion’s Award in 2013.

The remarkable success of his journey so far is underscored by two things – his IQ has been repeatedly measured between 40 and 50, attesting to an indomitable personality and natural supports from family and friends.  And, an Innovations Waiver begun in 2009. Were it not for the Waiver, his soaring independence and membership in our community would have plateaued when he left high school. 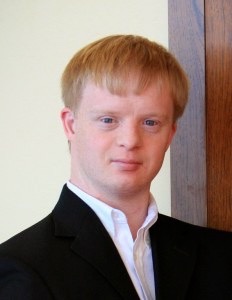 As parents, we believe the second factor, the waiver, has been the key to an otherwise natural developmental process – either declining or emerging – after formal schooling.  The waiver has provided supports for his work, for continued education at our local technical college, and full community immersion in theater, Special Olympics, and his church, where he and his fiancée serve communion each month.  People with Down syndrome don’t stop learning and engaging, just the opposite if given a chance.

Jeremy’s growing, waiver-supported independence has had an economic impact on him as well as our family.  Both parents were professionally employed, something impossible if he were at home alone after school. While he received $30,000 in Medicaid support and grew exponentially, we were able to annually pay taxes on $100,000, maintain our advocacy roles, and lead healthy family lives.  It was a win-win for us, Jeremy, his sister, support providers, and our community.

Jeremy was clobbered with aspiration pneumonia not  long ago, underwent life-saving surgeries and became a life-long tube feeder.  He now lives with us at home and receives 5 tube feedings a day. His independence and ours took a major hit.  But, again, thanks to the Innovations Waiver, he receives the support that champions his employment, joy as a thespian and athlete and full community inclusion.

This support has in turn returned some of our independence to engage our legislature and you as advocates for significant changes in the Registry.  We believe passionately that the services he receives are vital for every family with a qualified special need. They are enhancing throughout the life-span, vital in the key developmental years, and economically a bargain for North Carolina.  Can you imagine 25,000 people with special needs (the growing list of people presently receiving and waiting for a waiver) being housed in state institutions at $130,000 per year as told in our tragic history?

We are fortunate for two-parent support, only one child with special needs, and an effervescent personality to inspire us.  We know the unique impact of single parenting, multiple special needs, and spotty provider care across the state makes us very lucky.  The legislature needs to know the potential that exists for all of us is in their hands.